A Little Man Computer (LMC) is a simulator which has many of the basic features of a modern computer that uses the Von Neumann architecture.

A Little Man Computer (LMC) is a simulator which has many of the basic features of a modern computer that uses the Von Neumann architecture (a central processing unit consisting of an arithmetic logic unit and registers, a control unit containing an instruction register and program counter, input and output mechanisms and RAM to store both data and instructions).
The LMC is based on the idea of a ‘Little Man’ acting like the control unit of a CPU, fetching instructions from RAM, decoding and executing them as well as managing the input and output mechanisms.
The two versions on this website can be programmed by using a basic set of 10 assembly code instructions which are then assembled into machine code (although in decimal not binary). 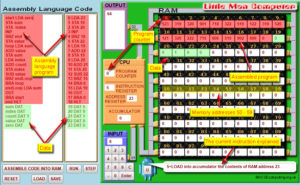 Some programming tasks to try using the LMC

A sorting program, input values are stored from memory address 80 onwards (therefore a maximum of 20 numbers can be sorted). An input of 0 starts the sort.

This program illustrates the LMC equivalent of an array, storing each successive INPUT in successive memory locations and counting (the equivalent of the array index) how many numbers are input. The numbers are then OUTPUT in the same order they were entered when a zero is entered.
The program has to alter some instructions as it runs. It does this by treating them as data (they are loaded, altered and saved) and in this program the ‘data’ values 350 and 550 are treated as STA (store) and LDA (load) instructions respectively by the LMC. This ‘data’ is altered as the program runs by adding a 1 to it so that it stores INPUT values in memory locations 50 onwards.

This program illustrates one of the issues with memory being used for both instructions and data. As the program runs, numbers are INPUT and stored in memory locations 0 onwards. When memory location 10 is reached the instructions in the main program loop start to be overwritten with data, causing the program to stop running correctly as the LMC tries to interpret the data as an instruction.